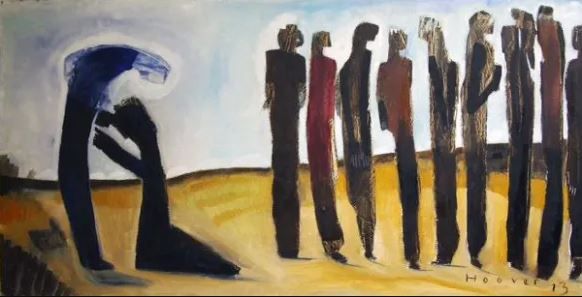 So what happened to the other nine lepers who had been healed?

Human nature being what it is, we can imagine:

One of the now-clean lepers went off to build a new life for himself. He busied himself seeking work, finding a new place to live, putting down roots for himself and, maybe someday, a family. Work became the driving force of his new life.

But another one of the lepers was overcome with anxiety: What do I do now? I can’t beg anymore. I have to find work — but I haven’t any skills. I’ve never learned to do anything. Who’ll hire me? How will I eat?  So worried and fearful was the once unclean leper for his future that he was paralyzed from doing anything and remained huddled at his old place by the city gate.

Still another leper, realizing that he was now clean, wanted revenge on the many passers-by who rejected him, condemned him as sinful and evil and inflicted so many cruelties and indignities on him because of his illness. They’ll pay for what they did to me! he vowed. In the end, having the “last laugh” wasn’t as satisfying as he imagined.

But one of the lepers, finally freed from his sufferings, ran as far away from that place as he could. All he wanted to do was forget his old life — and everyone and everything about it. He tried to make himself deaf to the cries of the suffering of others — but he could never run away far enough not to hear them. Far greater a disability than his leprosy was his lack of compassionate understanding for other lepers and those suffering similar illnesses. He could have been a source of solace and hope to others, but instead remained a leper to his self-absorption.

And, of course, there was one leper who went out and celebrated . . . and celebrated and celebrated. His newfound joy lasted as long as the spirits did. But once the wine and the camaraderie who came with it disappeared, he had to face a new life completely lost and alone.

There was one leper who didn’t believe he was made clean. Why would anyone — least of all God! — want to do this for him? There had to be catch. So he did nothing; he just waited and waited for his leprosy to return. As far as he was concerned, he was never healed. And he wasn’t.

And so the nine lepers went their separate ways. But without a sense of gratitude for the miracle they had experienced, the miracle didn’t last very long, for their fears, their angers, their repressions, their scepticisms, their misplaced hopes and values just made them lepers all over again.

God has breathed his life into us and set us on this wonderful life. We did not nothing to merit or earn this life — we are all the recipients of our Creator’s love. The only fitting response we can make is to stand humbly before God in quiet, humble thanks. Such a sense of gratitude can transform cynicism and despair into optimism and hope and make whatever good we do experiences of grace. But too often we let our obsessions with money and fame, our worries and fears, our disappointments and hurts overwhelm any sense of gratitude. Like the Samaritan who gives thanks for the miracle that has taken place, we, too, can be transformed by such joyful gratitude to God once we realize that, in Christ, we have been “made whole,” “made clean,” “restored” to completeness in his hope and love.