The Building
The body of the church is rectangular, rather than cruciform, with side aisles forming buttresses to the arches of the nave. The aisles are also buttressed. The buttresses can be seen on the outer walls.

The church measurements (Internal, excluding spire) as per original plans -133 ft long x 51ft 2inches wide (40.54 metres x 15.60 metres. A polygonal apse forms a raised chancel at the South-west end.
Inside, the ceiling is dark blue, while the walls are light beige. 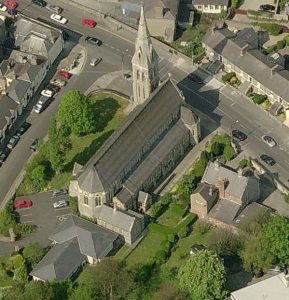 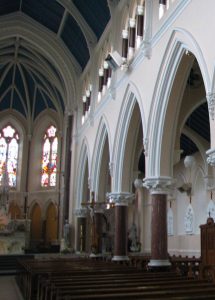 The main features of the interior are white, but there are elements of red, white, and black marble.
Externally, the walls are finished in rusticated Granite, relieved with chiselled limestone and faced with Bath Stone. The roof is slated.

The church is aligned north-north-east/south-south-west with the entrance on the north-north-east end. On this end the main feature is the rose window. Below this window are elaborately carved mullions of Caen stone and an arcade of niches of Aberdeen Granite with a background of green porphyry. Over the centre, the statue of St Patrick stands on a shaft of black polished marble. 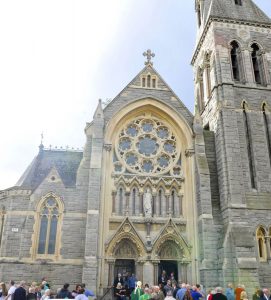 The Chancel
In the chancel area, (area around the main altar) the chancel arch is supported by shafts of red Cork marble; the capitals and the arch itself are of Caen stone, carved by Thomas Early of Dublin. 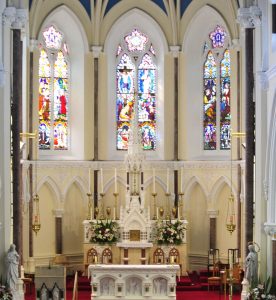 Arches and Pillars
The arches on either side of the nave are of stone set on shafts of Mitchelstown brown porphyry with circular bases of white-veined Italian marble and sub-bases of black Ennis marble.
The capitals of these brownpillars are carved by Thomas Early and Co to represent various forms of vegitation and fruits. For many years, these capitals have been painted white and almost fade into the background. An older photo from the 1920s held in the National Library shows the capitals unpainted as granite, and much more prominent as a result.

All stained glass windows are from the studios of Michael O Connor of London. For much more detail and images of the stained glass, click here 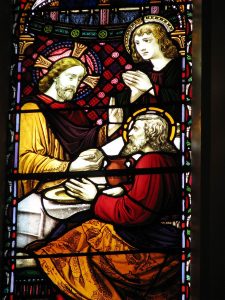 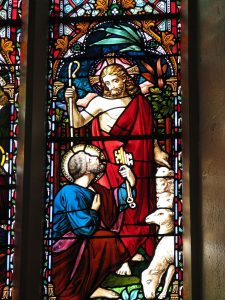 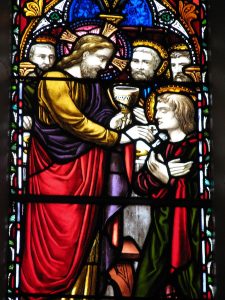 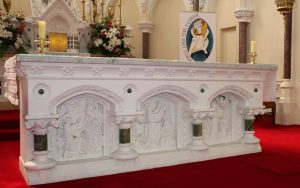 The altar table is white and shows three scenes from the Old testament in relief, each set in an alcove and separated by green marble columns. The overall style is in keeping with the Stations of the Cross

Statues and Stations
The rule at St Patrick’s seems to be that you can have any colour provided that it is white – unless you are St Anthony (who is in full colour). The 14 Stations of the Cross are in white relief mounted directly on the church walls. 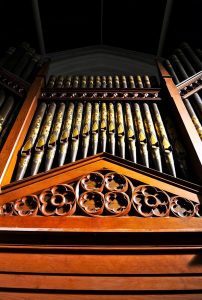 The Organ
The builder of this organ is unknown, but Derek Verso (who restored the organ) surmises that it might have been John White, or possibly John White bought it from a French builder (Calaillé-Coll?). The action is mechanical throughout; the manuals each have 56 notes and the pedal 30.

Steeple and bell
The steeple was partly (about two-thirds) completed at the date when the church was opened. It was finally completed many years later as a separate contract.

In a book of poems by John Gunn, published 1890 entitled “A casket of Irish pearls, subjects in prose and verse, relating chiefly to Ireland” the text opposite appears on Page 34 and refers to our bell.
The mountings of the bell have been recently refurbished and the striking mechanism has been automated in 2010

Michael O Connor, stained glass artist operated a studio in Dublin until 1842, and in London thereafter. The windows at St Patrick’s are from his London studio.  The Gold Medal for Stained Glass was awarded to the O’Connor Studios, at the International Exhibition (1862) London. In 1998, the windows were examined by Ken Ryan of Abbey Stained Glass Studios, and renovation work was undertaken.

The following is a sample of the stained glass windows.  Each of the 7 main windows in the chancel has a pair of images from the life of St Patrick in the lower one-third of the window, making 14 images in total. Of these, 10 are shown below. The 4 images not shown comprise two from the early life and two from the late period, one of which is a deathbed scene. 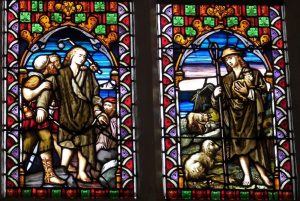 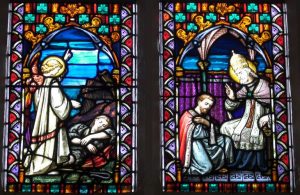 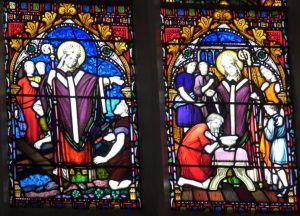 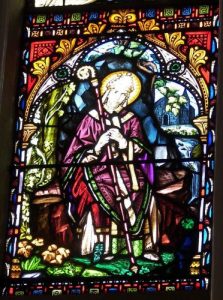 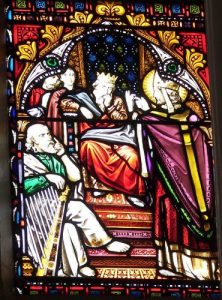 Christ and the Holy Family 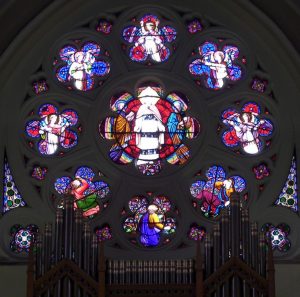