Special Acknowledgement – The parish of Monkstown is deeply indebted to Mr Gerard Hyland of The Pugin Society for his help in compiling this historical note. 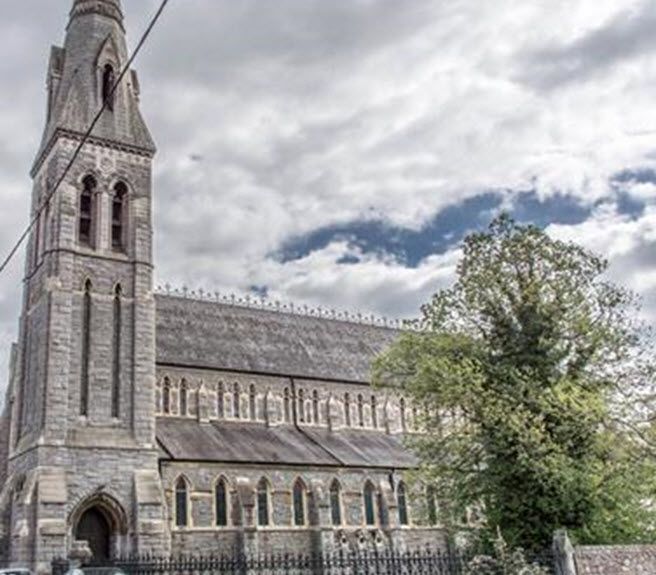 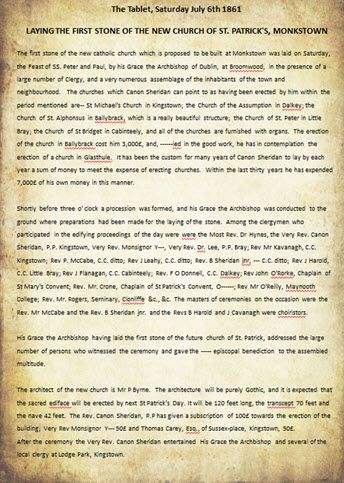 In 1829, a week before Catholic Emancipation, the parish of Kingstown was constituted, with Canon Bartholomew Sheridan (Editors note:-incorrectly listed as “Sheehan” in the 1966 booklet “Monkstown: The Story of a Parish) as it’s first parish priest. His parish stretched over a wide area including Monkstown, Dalkey, Killiney, Glasthule. He was a great church-builder.

St Patrick’s, Monkstown was the last of 5 churches commissioned by him in 1861. The foundation stone was laid on June 29th 1861. The site had earlier been purchased from the James Doherty, Solicitor, of Broomwood, Monkstown. Canon Sheridan’s intention was to build a replica of Dalkey church, which he himself had commissioned some years previously. But he died before much progress had been made. The following is an extract from The Tablet July 6th 1861. (A scan of the original can be seen here).

Re-Design
The new PP Canon James Cavanagh, considered such a design obsolete and unsuited to the locality. He commissioned George Coppinger Ashlin (1837 – 1921) and Edward Welby Pugin (1834–1875) to draw up a new design.

By late 1863 things had progressed to the point where the London-based magazine “Builder” on 28th Nov was able to report that “at Monkstown, city Dublin, a new Roman Catholic church is about to be erected. The building will be in the Early Geometric style, and will accommodate about 1,500 persons. A tower and spire will stand at the south aisle, and will rise to the height of 160 feet, forming a prominent feature of the building seen from the sea. The west gable will be pierced by a circular wheel window, under which will be two canopied doorways. There will be a colossal figure of the patron saint, St Patrick, supported on an Aberdeen granite column rising from between these doorways. At the extremity of the aisle will stand the baptistery, forming a western transept. In the interior, a new feature has been introduced in the clerestory, which will be formed by an arcade of detached shafts and arches. The chancel will be separated from the nave by an arch supported on marble columns and will be lighted by seven lofty two-light windows, in which will be represented, in stained glass, the figures of our Lord and the twelve Apostles. The cost, including spire, will be about £7,000. The designs are by Messrs Pugin & Ashlin, of Dublin”

(Editors note:- There was a convention of naming the altar end of a church as the east end, regardless of its actual orientation. (1) the “west gable” referred to is actually on the north-east end of the church (2) the tower and spire is on the northmost corner. The stained glass windows actually installed do not depict our Lord and the twelve Apostles. )

The Architects
E. W. Pugin was the son of Augustus Welby Northmore Pugin, and a member of the most distinguished family of architects of the time. The older Pugin had designed many churches and cathedrals, and is best remembered for his design of the Houses of Parliament at Westminster, and in Ireland for his designs of St Patricks College, Maynooth, and for Enniscorthy and Killarney cathedrals. E. W. Pugin was responsible in whole or in partnership for over 100 Catholic churches in Ireland and England.

George Ashlin was the partner in the Pugin firm with responsibility for Irish work. He married Mary Pugin, a sister of E.W.Pugin. Together, the Pugin/Ashlin partnership, which had offices at 90 St Stephens Green was responsible for about 22 Irish churches and some other buildings. Monkstown readers will be familiar with Glasthule and Donnybrook churches, both of which are Pugin/Ashlin designs and have many features similar to St Patricks. 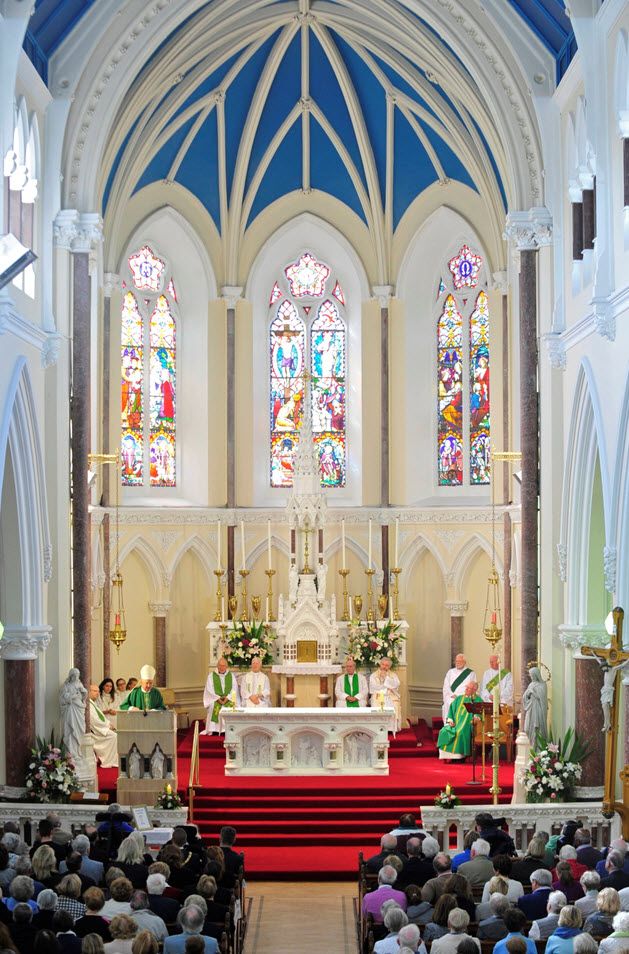 Contract for construction
On December 30th 1863, a contract was signed with Michael Meade, Builder, of Great Brunswick St, Dublin for the construction of the church. The agreed price was £5,450, excluding the spire, and the work was scheduled for completion in one and a half years.

In 1865, Canon Cavanagh died before seeing the results of his commission. He was replaced by Monsignor Edward McCabe, P.P., (later to become Cardinal Archbishop of Dublin).

Some months later, on 1st December 1865, the Dublin Builder reported that “this church which is at present in the course of erection, is in the French Pointed style. Exclusive of sacristies &c., it is 180ft in length by 60ft in width. The principal view of the building obtained from the Dublin Road is the western front, which has been made as effective as possible on this account. The tower, which stands at the S.W. angle, has been somewhat detached from the nave wall to give greater width. The baptistery occupies the opposite angle, and has an aspidal termination projecting from the lines of the aisle walls. The entire breadth of this front is nearly 80 feet. There are two doorways in the the west gable, between which will stand a statue of the patron saint. These are surrounded by an arcade of five arches, supported on Aberdeen Granite columns over which is the rose window. The whole is enclosed by a lofty arch rising from the ground. The clerestory are arranged internally in the form of a continuous arcade resting on red sandstone columns. The other internal features will be sufficiently explained by the accompanying view.”

The “accompanying view”, which can be seen here is a drawing by Pugin and Ashlin of the church interior, with no seats in place. There are slight differences from the finished church as it is now. In particular, the drawing shows decorated panels on the ceiling. Whether these were put in place and have been painted over is not known. There are, of course, modern modifications to the altar area and altar rails as well as the removal of the pulpit, all dating from the post-Vatican II period.

Although the actual construction took over two and a half years, it would appear even by modern standards to have been a very rapid construction. The table below shows that materials had to be brought in from a variety of locations within Ireland and from various places abroad. There were very limited mechanical aids available to assist in the construction. 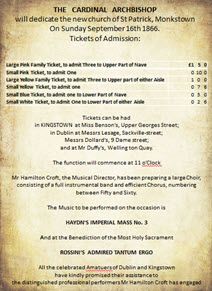 One week later, on Sept 15th 1866, on the eve of the dedication, the Freeman’s Journal reported with typical Victorian style:- 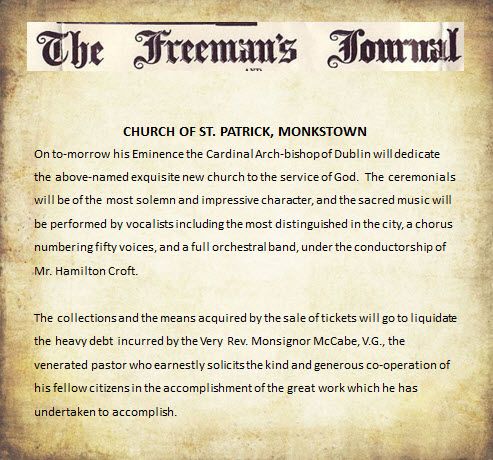 The dedication was performed by Paul Cardinal Cullen. There was a temporary altar and a temporary pulpit, and the spire was half-finished.

Fr James Leahy was moved from Kingstown to Monkstown as the first resident curate.

The spire was completed about 1881, under the supervision of John Loftus Robinson, using funds donated by a parishioner, Patrick Madden.

The Parochial House, adjacent to St Patrick’s was built in 1892 as a curates house.

The assistance of Gerard Hyland of The Pugin Society is acknowledged.

Continue to Features and Pictures of the Church